← For individual product information and to order use the search function…

Original manufacturer catalytic converters are traditionally an expensive part to replace. Fortunately, Jetex can offer an alternative to the OE replacement at a more competitive price point, sourced from the UK’s largest supplier of catalysts. Availability and product range is second to none.

Catalyst is made up of the following components:

A Catalytic Converter is a “flow-through” device and works by converting the harmful exhaust emissions into less harmful ones when the gasses pass through it.

These parts are specifically designed for diesel engines to trap harmful particulates.

DPFs are normally made from two different materials;

Cordierite is most commonly used and is found in our standard range of DPFs. It is a ceramic material with excellent filtration efficiency and thermal properties. The only drawback of cordierite is its relatively low melting point of 1200°C, and they have occasionally been known to melt during regeneration if the filter is extremely blocked – although these instances are very rare. Cordierite DPFs are commonly used in the aftermarket and in additive systems in conjunction with diesel oxidisation catalysts.

Silicon Carbide (SiC) is found in our Premium range of DPFs and is a compound of silicon and carbon. It has a melting point of 2700°C so is extremely unlikely to melt during regeneration. It has to be made from small segments fixed together with special cement to enable it to cope with heat expansion. They also boast 99% filtration efficiency. They are commonly used in O.E and catalysing DPFs.

Of course, over time, the DPF will reach it’s operating capacity as the particulates accumulate. The Engine Management System (ECU) constantly monitors the filter and will carry out a regeneration to stop it blocking.

As a DPF is a “soot trap” and has to be able to clean itself to prevent it becoming blocked and affecting the running of the vehicle. This process is known as regeneration. There are three different types of regeneration:

Passive Regeneration occurs during normal driving conditions when the DPF becomes hot enough to burn off some of the trapped particulates naturally at 550°C.

Active Regeneration is an ECU led process. When the level of soot in the filter reaches around 45%, the ECU will make small adjustments to the fuel injection timing and increases the exhaust gas temperature. The optimum temperature required for particle combustion is 600°C. Active regeneration normally occurs around every 450 miles, but it does depend on how the vehicle is driven. Vehicles that are primarily driven on short urban journeys will regenerate more often than those primarily driven on motorways. This is due to a greater build-up of particles at lower speeds. The regeneration cycle will generally be triggered by the back pressure. Failing this, mileage is used as a backup.

Forced Regeneration is carried out by garages with Diagnostic equipment.

Whilst all DPFs work in the same way car manufacturers use slightly different variations of the technology.

Fuel Additive Systems – theses are used in conjunction with a diesel catalyst. This type of DPF uses a fuel additive in order to aid the regeneration process. The additive enables regeneration to take place at a lower temperature of 400°C in conditions where regeneration would not normally be possible. It is advised that this type of DPF needs to be replaced as a service item at around 75,000 miles. Fuel additive systems are favoured by French manufacturers, such as Citroen and Peugeot along with Volvo.

Coated DPFs – or a “non-additive” DPF, uses a precious metal coating to aid the regeneration process. The coated DPF catalyses as well as filters, so the vehicle doesn’t necessarily need a separate catalytic converter. The coating of precious metals also lowers the point of “Regeneration” to 400°C. Using this type of system, the DPF can expect to last around 150,000 miles under normal operating conditions. Coated DPFs are favoured by German manufacturers such as BMW, VAG and Mercedes along with Jaguar and Land Rover.

The DPF is unlikely to be the cause of the vehicle fault. Make sure the fault is rectified before fitting a replacement part. Some common issues;

The DPF light comes back on within a few miles.

The DPF keeps blocking up. 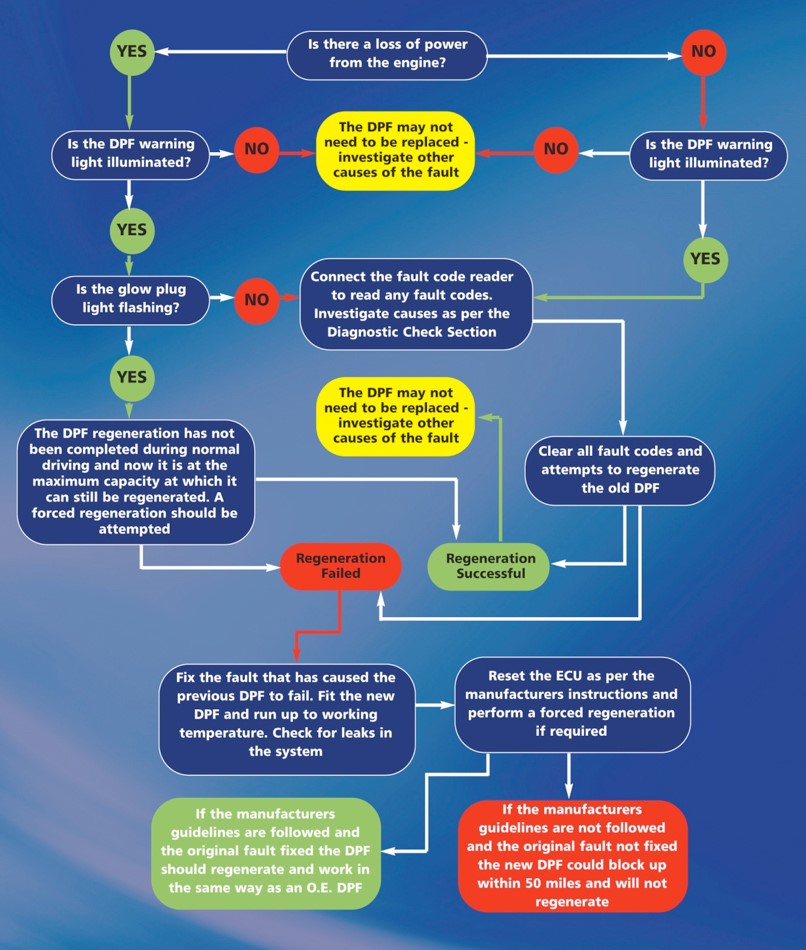